Annually the community theatre where I worked, led one or two theatre tour trips to different locations around the country. Since its opening on Broadway, patrons had been asking about the possibility of seeing Hamilton: An American Musical in New York City. When the opportunity arose to purchase group tickets to see the show in Chicago, Illinois, before going ahead with booking and planning a trip market research was conducted by sending out a survey to the internal group travel marketing list. 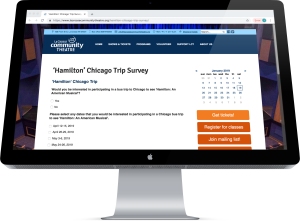 After an overwhelmingly positive response to the survey, planning commenced for a four-day trip to see Hamilton: An American Musical in Chicago, Illinois. Prior to the announcement of the trip, a landing page was created for the organization’s website.

The trip was announced via e-campaign several days prior to the registration window opening. 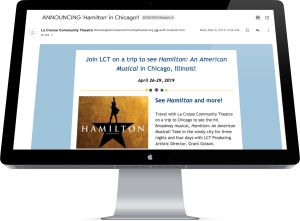 Once registration opened, the tour was supported with additional marketing on social media, with a web graphic on the website, digital TV displays in the building lobby, a tri-fold brochure, and a print advertisement in the holiday show program. 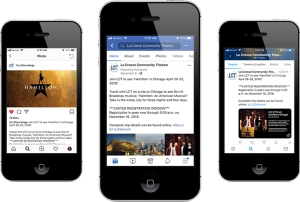